The History of the József Attila Library of Perkáta

The first data referring to the culture of the public library in Perkáta have been known since the beginning of the XIXth century when associations and reader’s clubs were established.

The first one – of which it is known to have had a set of rules  – was the Reading Club of Perkáta, began its activity on 3rd April, 1873.

The Civilian Reading of Nagy- Perkáta was established on 13th March, 1890.

This was followed by the Library for the Craftsmen of Perkáta on 31st December, 1870.

All three included a librarian position, although craftsmen already paid for his work.

The Catholic Forum also owned a smaller library, as well as the Smallholder Club and the Levente Association.

The library of the sisters of the Hospitallers, named after Saint Vince of Paula is also worth mentioning, where a separate stock was established for the teacher’s faculty next to the student’s library.

The Győry family also owned a library in the local castle.
Only the public library , established in 1950 by the regional library, can be considered to be a public library in Perkáta, which later on, after a process of collecting, included old volumes from the previous public collection, preserved by the locals. It was adequately financed, although regular developments could only be carried out following the liquidation of the deposit system and after the council took over the management of the library.

From 1952 to 1954, books could have been lent from a locked cupboard full of books, placed on the corridor of the school.

In FejérCounty, independent libraries were established in a row, one after the other. At this time, approximately 6000 citizens lived in Perkáta.

The library has also accomplished its mass educational tasks in the 1960’s. In 1964, the number of books on stock reached 6200 volumes, and there were 780 member readers. On the surrounding moorland branch libraries were operated. It became the main institution of local mass education in the middle of the 1960’s with its programs, it also gained attention with its lectures.

The library stayed in the same building until 1975, however significant changes have taken place. In the autumn of 1967, its building was renovated on the inside and the outside as well, parquetry was laid, the old equipment was fully changed. On the whole, this was the time when the public library in Perkáta reached its ideal, satisfying looks. The year 1969 also brought about new changes: with the liquidation of the lodging, clubhouses were opened in connection with the library and these mainly relieved the only free-shelved library of the other forms of mass educational tasks. Here we have to note the that public library has undertaken a bigger part of mass education since its establishment rather than its fellow institutions, as it was responsible for most of these tasks in lack of a community centre.

At the beginning of the 1970s, the local council decided to build a new elementary school, and replace the old one in the Győry castle with a community centre. The new school was assigned on 4th November, 1974, the renovation of the castle began after this event. On 20th August, 1975, the renovated rooms were handed over to the readers. At this point, the public library took its well-deserved place, which is in an ideal location: the castle is in the centre of the village, near the school, the nursery, medical and other facilities. The library itself is placed at the front bigger rooms, which are 2 583,34 ft². The adult section is in the middle, the children’s section is to the right ( in a separate room from 1978), the reading-room can be found to the left (including the reference library and the music department since 1980).

From July 2004, an eMagyarország spot is also available in the library.

About the changes in the life of the library

In 2012, in the József Attila Library, the realization of two significant, successful tenders were started:

The New Széchenyi Plan, the code of which is TIOP-1.2.3-11/1-2012-0139, which is called the “The Development of the Infrastructure of the Library in Perkáta”, with the support of the European Union, and financed by the European Regional Development Fund, and invests 8 000 000 HUF in the project.

In the József Attila Library, the development of the so-called computer-park has begun. New computers have been placed along with other tools: printers, notebooks, projectors, LED TVs, DVD-HVS. For the visually impaired, a Poet Compact reader machine has been placed.

In connection with the New Széchenyi Plan, with the code number TÁMOP-3.2.4.A-11/1-2012-0040, entitled “Tudásdepó-Expressz” – to strenghten the part of informal learning in the process of life-long studying, under the name of “Sixty-five reasons why it is worth reading in Perkáta” – which is put into effect with the support of the European Union, financed by the European Social Fund with 38 779 762 HUF.

Seventeen study groups have been put into motion in connection with the “Sixty-five reasons why it is worth reading in Perkáta” program, which is effectuated by 23 teachers.

The goal of the tender is to improve the operating system of the library to support qualitative learning and teaching outside formal education, to help develop reading and digital competences with the help of the facilities in the library. A priority is to reduce obstacles created by regional differences.

One of the main target groups is the children- and adolescents and the goal is the early socialization and education well before school. The other main target group is the adults of lagging regions, for whom these developments create equal access to cultural facilities. The competence is firmly supporting the involvement of handicapped and underprivileged people. The sessions can host maximum 8 participants at a time.

The development of reading culture will be gained through campaigns popularizing reading, writer- and reader meetings, lectures, quizzes and study groups. Summer reading camps will be organized.

In the library, visitors can have access to public information on the user’s computers, informal learning is possible.

We provide help with the use of computers. A course about computer- and internet use is available for those who are interested in the topic, with the code number TÁMOP-3.2.4.A-11/1-2012-0040, with the support of “Tudásdepó-Expressz”.

We are in cooperation with libraries, schools and kindergartens.

Our librarian was able to take part in an accredited vocational training for the improvement of the vocational competence in the library. The title of the training: Preparation for developing reading for different target groups.

The tender provided the acquisition of the necessary furniture to evolve appropriate facilities: In the children’s department, old furniture has been changed to newer: We were given chairs, bean bag chairs, tables, televisions and book review shelves.

A left-luggage office has been placed in the lobby for visitors.

Partitions were placed in the reading rooms, book review shelves completed the space.

An e-Catalog is being introduced as well as electronic lending.

We are about to establish our own, multilingual web page for the library, especially for the children’s department. 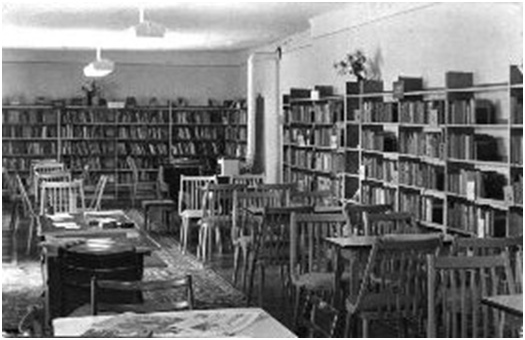 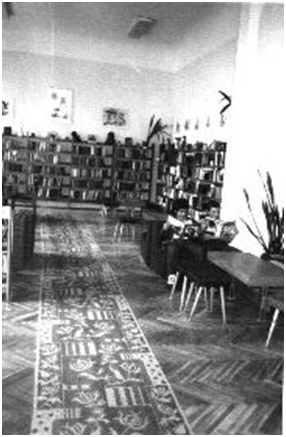 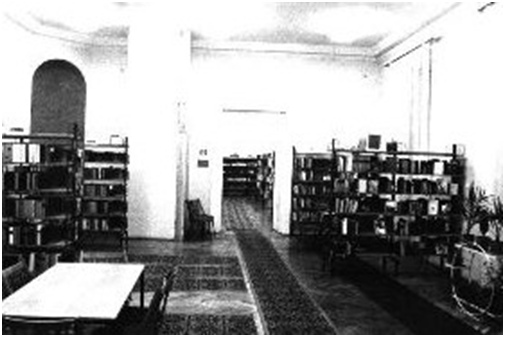 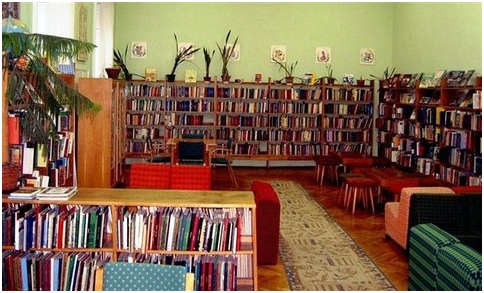 Children’s Library until the changes in 2012 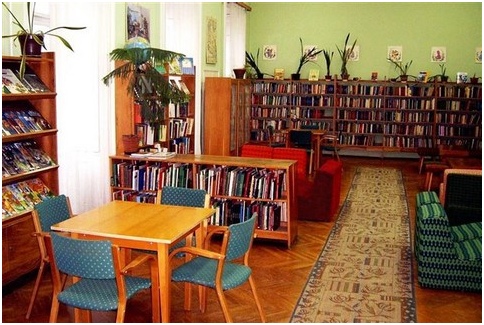 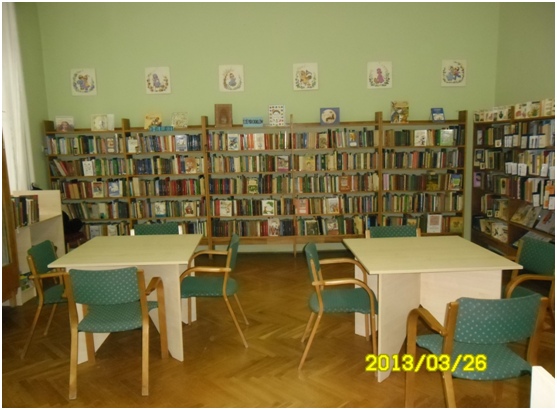 New desks arrived at the Children’s Library in 2012 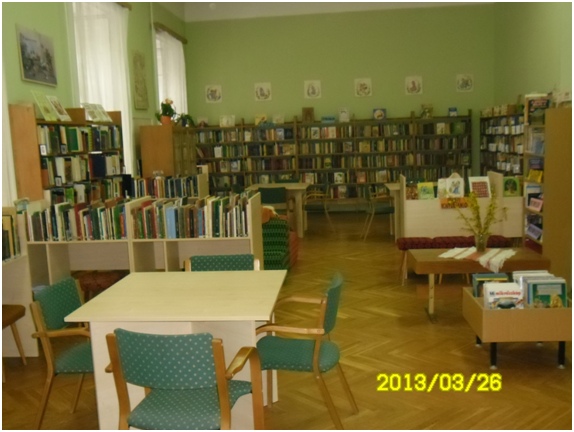 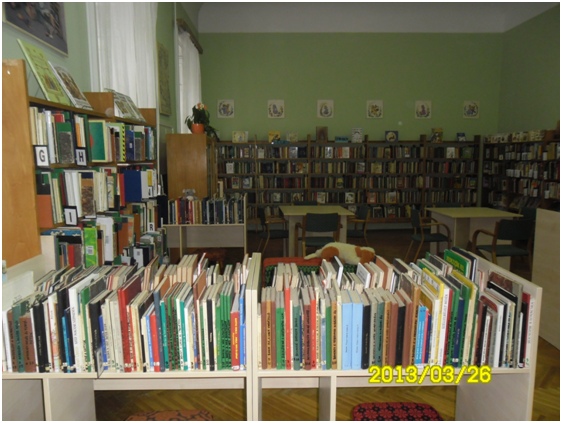 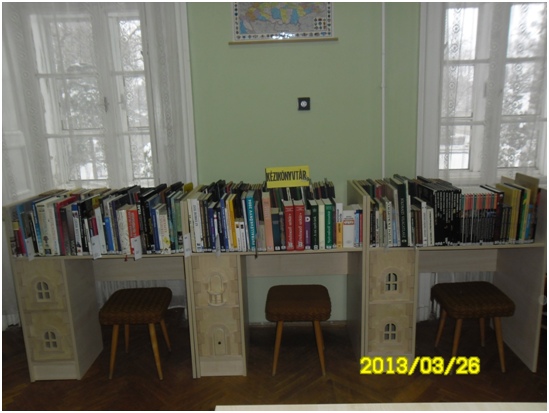 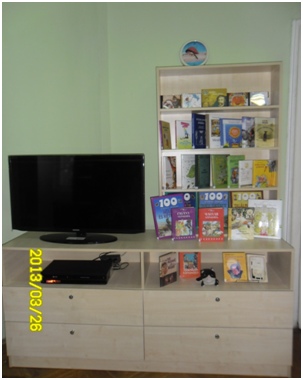 Our library got a LED television and a DVD-VHS recorder/player.A practical fitted cupboard with drawers offers a suitable place for them. 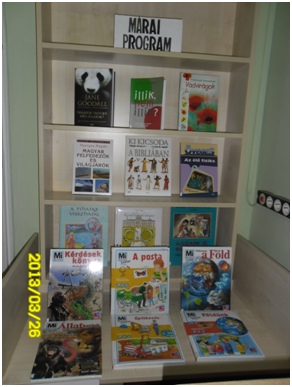 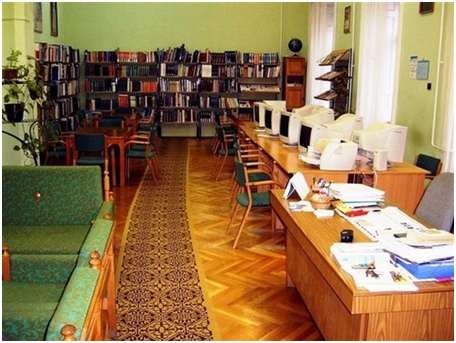 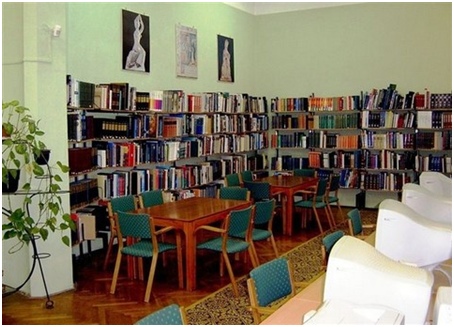 Reference library in the reading-room 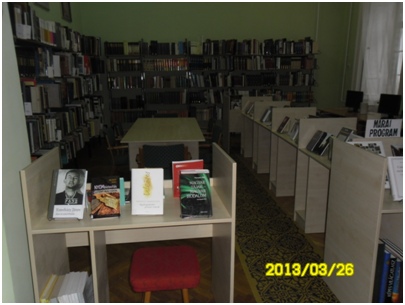 New desk in the reference library for the Adult Library,2012 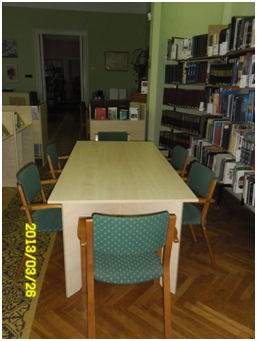 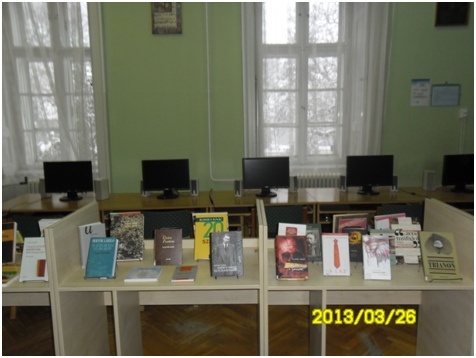 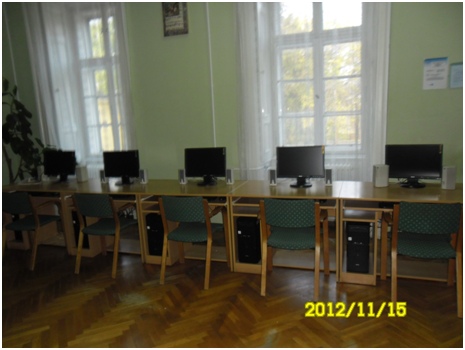 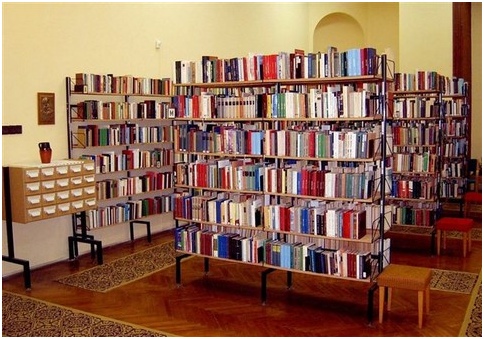 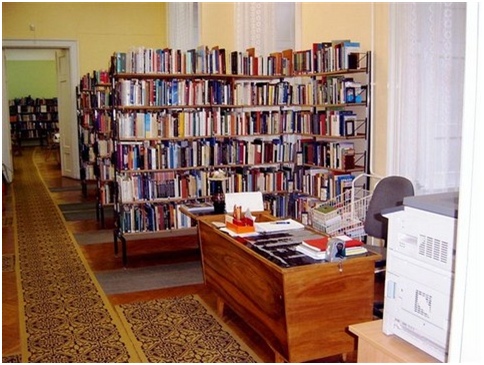 The adult library a long time ago 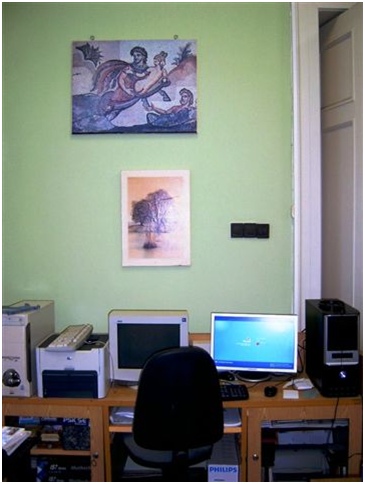 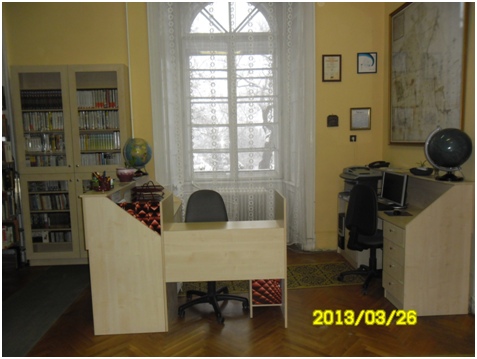 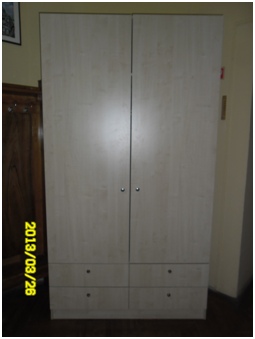